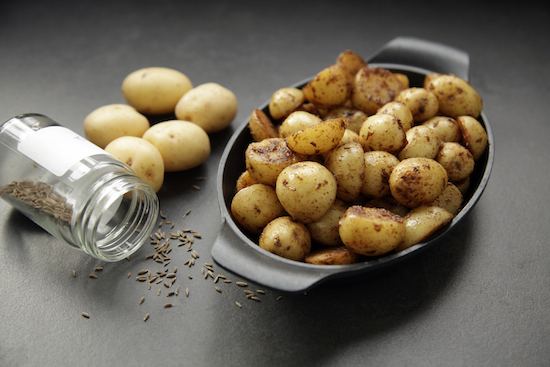 60 years young, auntie Maggie (or Madge) is infamous for all sorts of misdemeanours.

Like nicking her neighbour's fresh herbs and passing them off as her own. And giving her 28-year-old nephew a rather risque playboy bunny costume for his birthday. A befitting senior member of a family of nutters. Madge was furious with us for showing up seven hours late to her country home on Saturday. Quickly realising we were not going to join her for lunch she abandoned her attempts to cook it midway, waiting in the garden with a bottle of wine, her man and the cat for company. By the time we arrived, Maggie was ready to skin her beloved cat (and any of us if we got in the way). And one quick glass of wine later, we were marched off to the local jazz performance at Arundel festival. On our return, it became quickly evident that Madge's half made lunch was now going to be dinner. Luckily for me, it was a soft and flavoursome cumin cauliflower potato. Unluckily for the others, it was just that. The remaining £145-worth of food shopping had been stashed away for a colossal barbeque the following day. As I ate the cumin cauliflower potato with mango pickle for dinner, I was inspired to cook it at home. Only this time, as a side dish to something equally simple for a weekday meal. So here is a simple jeera aloo - soft new potatoes steeped in sizzling cumin with no pre-boiling or peeling required. It's the cat's whiskers for lovely Madge.

In a large frying pan, heat the oil over a medium high flame. When it is hot, add the hing and almost immediately the whole cumin and red chilli.

As they sizzle up, toss in the new potatoes and stir them through the cumin. Then mix the cumin, coriander and chilli powder in half a cup of hot water and pour it over the potatoes.

Stir the potatoes vigorously to mix it well into the spices. Add salt now to taste, making a lovely rounded masala, or spice mix, for the potatoes.

Now cover the pan and let the potatoes cook. Lift the lid off every two to three minutes and give them a good stir ensuring they don’t stick to the bottom of the pan. If the water bubbles away, add two tablespoons more, repeating this process until you can insert a fork through the bone dry potatoes easily.

The potatoes should be sautéed dry. If they are cooked through but you still have too must moisture in the pan, take the lid off and let the moisture bubble away, while you stir the potatoes gently. Check your jeera aloo for salt and enjoy.