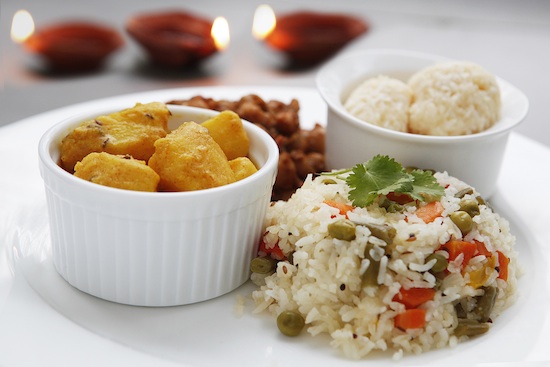 The kids are growing. The family home is sorted. So, inevitably the plans for global domination took centre stage again.

I have a new job people. In a ginormous communications consultancy. Just in time for Diwali.

Having children not so much led me to slip down the corporate ladder, as caused me to borderline fall off it entirely. Albeit briefly. So much stuff about the glass ceiling, the nappy wall, yada yada yada. My experience is that if you want to be treated equally, you have to act equally. In the workplace, this means few concessions. Sad. But true.

On the upside, the kids are totally worth it. I also get free toast before 9:00am, there’s a bar downstairs and my new colleagues are quite intrigued by my Indian cooking avatar. In the hope they will be invited to many feasts, no doubt.

I have stormed in and started cracking all manner of whips. While keeping schtum about my TV debut tomorrow in Episode 10 of Maddhur Jaffrey’s Curry Nation. This is, frankly, terrifying. I’ll be hiding under the couch in good time, with some cuddly toys for company and a glass of something cold and alcoholic for my nerves.

Just like I survived all those hideously loud firecrackers during my childhood in Kolkata. It’s all come full circle, see?

Here’s my feast for a year with great things ahead. For all you lovely people. Marking new beginnings and new ventures. A fully vegetarian meal to keep the tone auspicious and served with copious quantities of alcohol: Chana Masala, Kashmiri Paneer, Dahi Wale Aloo, Vegetable Pulao and Coconut Laddoos. I’ll share the Dahi Wale Aloo recipe, a sublime potato curry which was a staple Diwali lunch with Pooris at my Marwari friend’s Diwali day kitchen in Kolkata.

Wash, peel and cut the potatoes into bite-sized cubes. Cover with cold water and bring to a boil, then cook gently for about 15 minutes until you can stick a fork into the pieces, with some difficulty. Grate the ginger while the potatoes are boiling.

Place a sieve over a pot and drain the potatoes in it, collecting the nutritious water. Take the heaving sieve off the pot and leave the potato water to cool down. In the meantime, wipe the pot you boiled the potatoes in well and bring the oil to heat in it on high. When it starts spluttering, toss in the asafoetida (heeng), then the chillies, cumin and ginger and quick succession.

As the ginger starts taking a golden colour, toss in the turmeric and paprika, then the potatoes and stir once until everything is well coated. Lower the heat to simmer.

Then, whisk the yoghurt into the cooler potato water and pour this mixture into the potatoes. Simmer gently, for about 10 minutes until oil oozes to the top, mashing a third of the cooked potatoes to the edges of the pot to create a thicker curry texture. Chop the fresh coriander and mix it into the potatoes to finish.

This potato curry is delicious mopped up with hot pooris or spooned into pulao. It tastes even better a day later too!