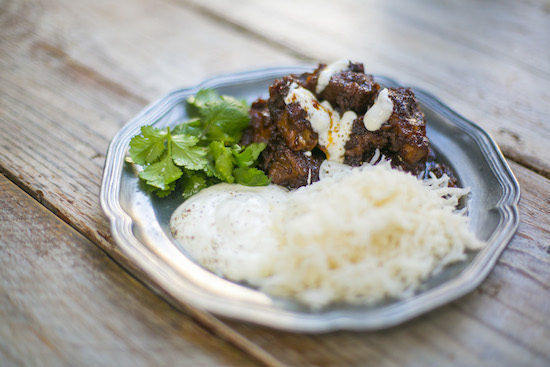 Spicy, sour and sweet, vindaloo nods to Goa’s Portugese heritage. Vin comes from Vinha, which is wine and Ahlos, garlic in Portugese, so vindaloo literally translates to pork in wine and garlic. Pork is not a widely eaten meat in India as it is either forbidden by religion or considered unclean. But, it is widely enjoyed in Goa, where it was originally introduced by the Portuguese to recently converted Christians. In Goa, traditionally palm vinegar or Toddy is used. This can be sourced quite easily online or in Oriental supermarkets as it’s quite commonly used in the Philippines too. But if that sounds like too much bother, then Apple Cider vinegar will work fine too. Just make sure you have a fruity vinegar to balance out the spices. I have made this before, but to me, this is the best pork vindaloo recipe I have cooked by miles. So, I made it for the lovely subscribers on Jamie Oliver's FoodTube, his YouTube Channel. I arrived with a stonking cold, and what you can't see is the giant mug of lemon and honey the lovely team made me while I chopped onions with bleary eyes. I blame the cold too for forgetting to add the cinnamon in the spice paste. That tea, and sinus busting vindaloo later, I felt a whole lot better. I can't say the same for the video Director, who was literally on fire as I left the studio! Please do watch the video here, and don't forget to leave me a comment to tell me what you think.

First dry roast the whole spices. Warm them up in a frying pan on a medium heat for about 10 seconds to help to extract and deepen the flavour in them. When you can smell the warm aroma of the spices, take the pan off the heat and leave it to sit.

Now place your roasted spices with four peeled fat cloves of garlic and half an inch of peeled ginger in a hand blender. Add the oil and then your vinegar. Give the spices and good whizz, adding warm water to get a smooth paste. Add salt now to your taste.

Next, add the vindaloo masala to your meat. Vindaloo is authentically made with boneless pork. Pork shoulder is best because of the fat in it and because it goes meltingly tender when stewed.

Mix the Vindaloo paste into the meat, adding salt and the turmeric, and mixing through well. You can do this in a ziplock bag too. Now seal and place in the fridge for at least four hours but preferably overnight.

When you are ready to cook, chop the onion into little pieces, and get the oil to sizzling hot on high heat. Toss in the onions with a teaspoon of light brown sugar, add a pinch of salt and saute them for 10 minutes until golden caramel.

In 10 mins, add the marinated pork and seal it well on high for five minutes. Then add a cup of warm water, reduce the heat to medium high and cook covered for 45-minutes to an hour. Just make sure you keep stirring from time to time to evenly cook the meat.

When your pork is so soft it barely needs chewing and resembles a chutney, take the lid off, check for salt and add more if you need to. Serve this pork vindaloo recipe with piping hot Basmati rice, and some yoghurt to douse any chilli flames.

Feeds 2-3 (depending on what else you're eating):   For the Vindaloo paste: